Our Kinesense Vid-ID tool has been online for more than 12 months now. I put it together partly as a way to collect all the CCTV format data we were collecting (We have data on more than 1000 formats and players now). It is also very useful for finding out about formats which we don't know about. Each time a law enforcement officer somewhere in the world searches for a file format using Vid-ID, and the database doesn't turn up a hit, I get a notification. An hour or two on google and I usually can find some new information to add to the list. I am also helped greatly by some friend who will email me directly when they find a new weird or wonderful video file format during their investigations. In this way, the Vid-ID database has grown by about 30% since I put the tool online.
Also very interesting - for me anyway - is to look at the statistics on which formats are most searched for. I don't know whether to interpret these most-searched-for formats as being more common than others - or whether they are the most confusing.
The numbers show a very long tail. About 70% of the formats in the Vid-ID database have never been searched for by anyone. Another 25% have only every been searched for by one person. This leaves about 5% which have perplexed more than one CCTV investigator. But some few formats are being turned up time and again - and by investigators in many countries around the world.
The graph below shows the top 20 formats in terms of unique user searches in 2012. The top two places - .mp4 and .avi - are relatively understandable as they are common container formats (and Vid-ID has a further lookup option for avi codecs). Next is .bix and in position 5 is .box - which commonly appear together in DVRs by i3DVR and Say Security. Bix and Box were searched for by someone every few days throughout 2012. .264 turns up high in the list - not surprisingly as this file extension is used by at least 4 different DVR manufacturers (and all 4 file types are mutually incompatible - just because a manufacturer says H264 doesn't mean the files are in any way standard!) 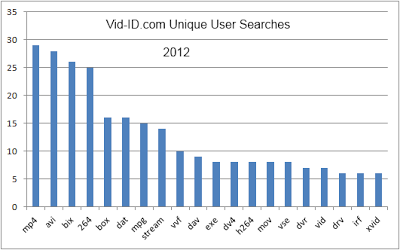 Position eight in the list is .stream which I hadn't actually heard of until users started searching for it. Eventually I tracked it down to a Taiwanese company called Avtech. The last interesting one in the list is .dvr which is such an attractive file extension for DVR manufacturers that at least 13 different (mutually incompatible) versions exist!


Update: Since I wrote the above, I have found out more details of some of the above and added them to the vid-id tool database. One interesting one is .Box/.Bix which we have now found a way to convert to a standard playable format.
Posted by Mark Sugrue at 16:03