The Cost of CCTV

CCTV is a powerful tool and, when a crime is caught on camera (and the video quality is good) few other types of evidence are as convincing to a judge or jury. The cost of gathering CCTV evidence is monumental. The UK has one of the highest densities of CCTV cameras of any major country, with an estimated 1.8 million CCTV cameras – the vast majority of which are privately owned and operated. Other countries may have fewer cameras, but are catching up quickly. A Study by Tayside Police in Scotland has shown that at least 64% of criminal investigations gather CCTV evidence, and a similar study by Cheshire police showed that 75% of that is from 3rd party sources. This means that half of all criminal cases involve video evidence captured from private DVRs (which equates to, very approximately, 900,000 cases in the UK each year). 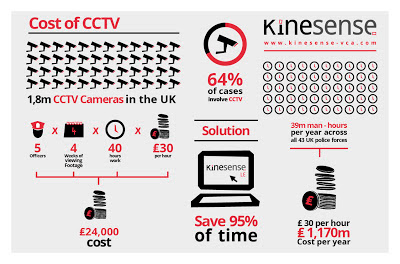 What is the cost of this to the police? There is no systematic study which quantifies the cost in time or resources of finding and recording or copying CCTV, bringing back to the station or delivering it to the audio-visual department, or even the cost in time and manpower of simply watching it – but that cost must be vast. I have spoken with quite a number of UK bobbies who find that their routine police work is frequently sidetracked by hours spent fiddling with DVRs and attempting to play or retrieve the footage, or simply driving the possibly-important but unplayable video recording in a squad car to the Audio-visual department. The number I have heard anecdotally is an average of two hours per week, per officer. That equates to 5% of each police officer’s time, or about 13 million man-hours per year across all 43 UK police forces. This calculation does not include the knock on costs and delays to the back office and technical staff or to case preparation or to the courts - which I calculate to be at least 15% or 39 million man hours. At a conservative value of £30 per hour on average, this back-of-the-envelope calculation gives us a cost of at least £1,170,000,000 per year in staff costs alone.

CCTV need not be this inefficient. DVRs could be designed with standard formats and user interfaces. Technology does exist to speed up the process of accessing video, of sending it securely (without having to use a squad car!) to a server and for speedily reviewing it. In many forces, audio-visual or computer crime departments end up doing too much of the work that should be done by investigative officers and there are tools available to enable front line officers to do this work.
Posted by Mark Sugrue at 14:28